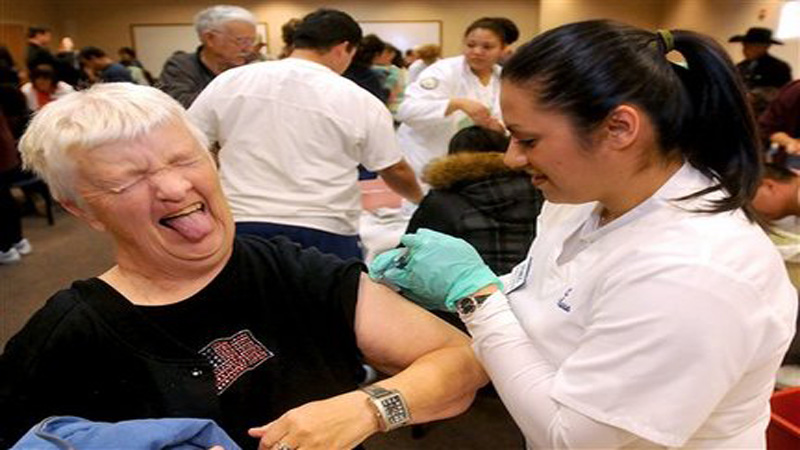 I saw this article and thought it would be good information to pass on to you. We all thought we were done with vaccines once we reached adulthood. It’s important to check with your doctors to ensure you’re still up to date with important shots so you can proactively avoid some of the diseases that can be so detrimental to senior’s health.

In the 1920s, the respiratory disease diphtheria was one of parents’ biggest fears for their children. In the United States, an estimated 100,000-200,000 cases of diphtheria per year caused 13,000-15,000 deaths, mainly children, in that decade (Wikipedia). Today, diphtheria vaccines have largely eradicated the disease from the United States. In fact, if diphtheria is remembered at all today, it’s because of the celebrated story of a relay by sled dogs and their mushers to deliver diphtheria antitoxin 674 miles away to Nome, Alaska, to prevent a predicted epidemic. The initial relay in 1925 became today’s Iditarod Trail Sled Dog Race.

Today, vaccines have curbed the development of many diseases that were once considered fatal, especially in older adults. While some vaccines have side effects, health experts say that the benefits typically outweigh the possible complications of certain illnesses in seniors. Except for people with certain health problems, such as cardiovascular disease, lung disease, diabetes, kidney problems or a condition that weakens the immune system, getting vaccinated is a safer choice than risking illness to obtain immune protection. Consult with your healthcare provider to discuss the advantages and disadvantages of each vaccine for you.

Vaccines work by exposing you to dead or weakened disease-causing microorganisms, which causes your body’s immune system to produce antibodies that fight the microorganisms, helping to make you immune to a specific disease. Most vaccines are given through a simple injection, usually in your arm, although some are administered by mouth or nasal spray.

The most prevalent vaccine is for influenza, commonly called the flu, a contagious illness caused by viruses. Older people are at the highest risk of developing serious flu complications that require hospitalization; in some cases, the flu can be fatal. Ninety percent of flu-related deaths and more than half of flu-related hospitalizations occur in people age 65 and older. As you age, your immune system weakens, which makes you more susceptible to the flu.

Health experts recommend that those 50 or older should receive one dose of influenza vaccine every year, preferably in October or November, before the winter flu season starts. Flu season usually peaks in January or February, but it can occur as late as May. Early immunization is most effective, but it is not too late to get the vaccine in December, January or later. Flu vaccines are needed every year because immunity is short-lived and vaccine manufacturers make updates every year to combat current strains of the virus.

If you get the flu vaccine, you are 60 percent less likely to need treatment for the flu by a healthcare provider. Vaccination may also reduce illness, antibiotic use, time lost from work, hospitalizations and deaths.

Although the flu vaccine is meant to protect you for one flu season, evidence supports that immunity declines more quickly in older people. Therefore, another flu vaccine option is available—one that contains a higher dose of antigen, the part of the vaccine that prompts the body to make an antibody. Designed specifically for people 65 and older, this alternative is intended to create a stronger immune response.

For those worried about the possible dangers, seasonal flu vaccines have a good safety track record (vaccines.gov). The Centers for Disease Control and Prevention (CDC) and the Food and Drug Administration (FDA) closely monitor their safety. As with any drug, mild side effects, such as soreness, headaches and fever, are common. Less common and more serious are severe reactions such as difficulty breathing, hives or facial swelling; for these, seek medical attention immediately.

Shingles is an extremely painful and contagious blistering rash, which is activated by the varicella zoster virus, the same virus that causes chickenpox. After a person recovers from chickenpox, the virus stays in the body in a dormant state but can reactivate years later, for reasons not fully known. At least 1 million people a year in the United States get shingles.

The zoster vaccine, which scientists developed in 2006, is not guaranteed to prevent shingles, but it can decrease your risk by about 50 percent, or at least minimize its severity. Vaccines.gov recommends that anyone 60 years of age or older get the shingles vaccine, regardless of whether they recall having had chickenpox or not. Studies show that more than 99 percent of Americans ages 40 and older have had chickenpox, even if they don’t remember. Shingles is far more common in people 50 years of age and older than in younger people, and increasing age can result in more severe effects.

A shingles rash usually appears on one side of the face or body and lasts from two to four weeks. Its main symptom is pain, which can be severe. Other symptoms include fever, headache, chills and upset stomach. Very rarely, a shingles infection can lead to pneumonia, hearing problems, blindness, brain inflammation (encephalitis) or death.

For approximately 20 percent of people, severe pain, called post-herpetic neuralgia (PHN), can continue long after the shingles rash clears up. Its repercussions are more widespread in seniors, affecting up to half of untreated people who are 60 years of age and older. Although the pain from PHN may be debilitating, it usually resolves in a few weeks or months.

While any vaccine can carry risks, no serious problems have been identified with the shingles vaccine. Mild reactions can include headache and redness, soreness, swelling or itching at the site of the injection.

Infection from pneumococcal bacteria is one of the leading causes of death in the United States from a vaccine-preventable disease. Seniors, especially, are susceptible to pneumonia, which is responsible each year for 60,000 deaths among those over 65. The CDC recommends that people age 65 and older receive a one-time dose of pneumococcal vaccine; those who were vaccinated more than five years ago and were younger than 65 at the time should get a one-time repeat vaccination.

Pneumococcal infections, which include pneumonia, blood infections (bacteremia), brain infections (pneumoccocal meningitis) and middle-ear infections, are spread through respiratory secretions, like coughing and sneezing. The disease comes from a type of bacteria called Streptococcus pneumoniae (pneumococcus) found in many people’s noses and throats.

Pneumonia symptoms include fever, cough, shortness of breath and chest pain. In addition to redness, pain and swelling at the injection site, vaccine side effects may include mild fever, fatigue, headache, chills or muscle pain.

The tetanus bacteria enters the body when cuts, scratches or wounds come into contact with contaminated soil, dust or manure. Tetanus, also known as lockjaw, affects the nervous system, causing painful muscle tightening and stiffness, usually all over the body. In some cases, you can’t open your mouth, swallow or even breathe. It can be deadly, particularly for older people, killing approximately one out of five people who are infected. Because the immunity from past tetanus shots eventually fades, ask your doctor if you are due for another vaccination.

Diphtheria is a respiratory bacterial infection that spreads from person to person through coughing or sneezing. If left untreated, it can cause airway obstruction, coma and death. Although both tetanus and diphtheria are rare in the United States today, people who become infected often have severe complications.

Pertussis, also known as whooping cough, produces severe coughing spells, which can cause difficulty breathing, vomiting and disturbed sleep. The illness can also lead to weight loss, incontinence and rib fractures from coughing. Up to 2 percent of adolescents and 5 percent of adults with pertussis are hospitalized or have complications, which could include pneumonia or death. Seniors are increasingly getting pertussis, possibly due to dwindling immunity.

You should get the Tdap vaccination as a one-time booster, regardless of when you received your last tetanus-diphtheria vaccine. Side effects include redness or swelling at the injection site, headache, fatigue, fever, nausea, vomiting, diarrhea and stomach ache.